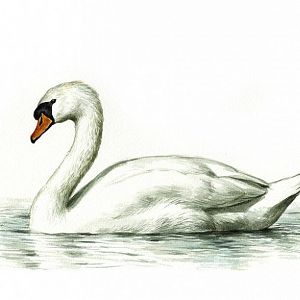 The Mute Swan (Cygnus olor): Body length 140-160 cm, wingspan 200-240 cm. It is a huge bird with white plumage and very long neck with small head. The tail is comparative long and pointed. It has an orange bill with a black knob on the forehead. Sexes are similar, the male has a larger bill-knob than female and usually during breeding they seem larger than females with deep orange bill. Juveniles are grey-brown with first dark grey bill and then pinkish-grey bill without a knob(Svensson, Mullarney and Zetterstrom, 2009).

Mute Swan breeds on freshwater lakes and along coasts. It is not a shy bird and sometimes it can be aggressive, male Swans often have territorial fights with wing-splashing rushes. Mute Swans keep their neck either straight or smoothly bent in S-shape when they are swimming. The threat posture is with wings raised like sails and head lowered over back (Svensson, Mullarney and Zetterstrom, 2009).

They mainly feed on aquatic plants.