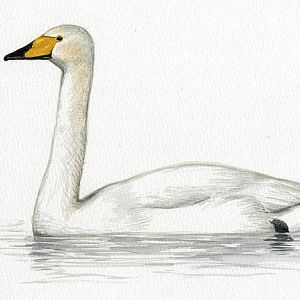 Whooper Swan (Cygnus cygnus): It is also a huge bird, similar to Mute Swan. It has white plumage, but many birds during spring and summer have stained brown head and neck. It has a long neck and its upper part generally held straight when swimming. Best told from the Mute and Tundra Swans by long, wedge-shaped bill, mainly yellow with black tip, yellow forming pointed wedge, reaching in front of nostril. Juveniles are grey, less brown and slightly paler than juvenile Mute Swans, very similar to Tundra Swans. Often slightly paler.

They are highly vocal birds and their calls are loud and bugling in quality, similar to Tundra Swan. They breed on tundra pools and small lakes with sheltering vegetation, on damp bogs and in marshes, typically in remote areas far north. Whooper Swan visits Greece during the winter (Svensson, Mullarney and Zetterstrom, 2009).

They are eating plants that grow at the bottom of the ponds.